A tribute to my favourite computer the ZX Spectrum 48k. I've decided to try and port one of my favourite ever games to a tablet I came to love.

For those who aren't familiar with this computer let me give you some feedback from Wikipedia.

The ZX Spectrum is an 8-bit personal home computer released in the United Kingdom in 1982 by Sinclair Research Ltd.
The machine was launched as the ZX Spectrum by Sinclair to highlight the machine's colour display, compared with the black-and-white of its predecessor, the ZX81. The Spectrum was ultimately released as eight different models, ranging from the entry level model with 16 kB RAM released in 1982 to the ZX Spectrum +3 with 128 kB RAM and built in floppy disk drive in 1987.

About the game
You must collect eggs placed on platforms in each level before running out of time. Extra points are awarded by eating seeds and as an extra bonus the clock stops for a while.

Don't think that you're on your own out there. No no no, you have to avoid hens protecting the eggs. So don't touch them or you'll loose a life and try to avoid gaps on the platforms or falling inside a gap at the bottom the screen will result loosing a life also.


I hope you have as much fun with this game as I had playing on the original computer and also while porting it. 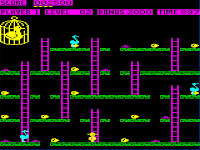 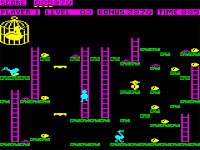 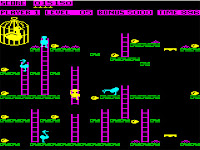 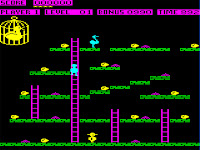